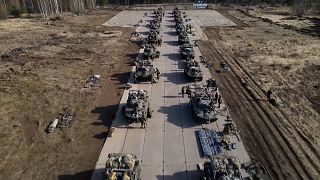 "On April 22, 2021, the main stage of exercises of Southern Military District Troops and Airborne Troops, carried out as part of a surprise combat readiness check, will be held at the Opuk training ground," the Ministry said.

The military manoeuvres are taking place amid tensions between Kyiv and Moscow. Josep Borrell, the EU's high representative for foreign policy, said Monday that Russia had concentrated more than 100,000 Russian troops near the Ukrainian borders and in Crimea.

Meanwhile, Russia has responded that it's free to deploy its armed forces on its own territory as it chooses.

Considered to still be Ukrainian territory by Western countries, including the EU and the US, Crimea came under Russian control after a controversial referendum on 16 March 2014, in which 97 per cent of the Crimea residents reportedly voted in favour of independence from Ukraine and joining Russia.

Western countries have continued to criticise what they consider an illegal annexation of the Peninsula.