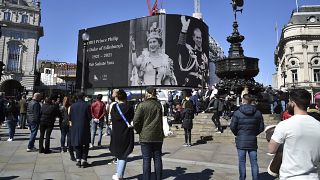 A military gun was fired to signal the start of the solemn tribute, which was observed in shops, railway stations and at sporting events across the country.

The ceremony with just 30 mourners took place entirely behind the castle's stately walls, with the public urged to stay away because of the pandemic.

The famous advertising screen at Piccadilly Circus displayed a tribute for Prince Philip, on the day of his funeral. Hundreds of people in central London stopped to take photos and remember the Duke of Edinburgh as a minute of silence was held nationwide at the beginning of the service.

People gather at Buckingham Palace in London during the minute of silence held during Prince Philip's funeral.

Tourists watch as members of an Iraqi paragliding team launch at sunset from Mount Azmar to glide over Iraq's northeastern city of Sulaimaniyah, in the autonomous Kurdistan region.