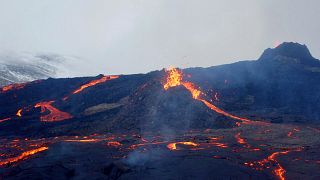 The Geldingadalir/Meradalir volcanic eruption in Iceland is producing roughly double the amount of gas pollution today than when it began on 19th March.

Three new craters have formed on 4th, 5th, and 10th April and the four erupting craters now are along a line roughly a kilometre long and could continue for months or even years.

It has become a popular visitor attraction and scientists are constantly monitoring in order to keep people as safe as possible.