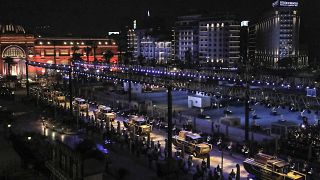 Egypt has carried out a Golden Parade to move 22 royal mummies from the old and iconic Egyptian museum to the new National Musuem of Egyptian Civilisation.

Named "Pharaohs' Golden Parade", the transport of the kings and queens of Old Egypt (18 and four respectively), was carried out first from oldest to most recent and the parade began at Tahrir square.

A procession of floats carrying the mummified remains of 22 pharaohs, including Egypt's most powerful ancient queen, were part of the parade.

Seqenenre Tao II, "the Brave", who reigned over southern Egypt some 1,600 years before Christ, was on the first chariot, while Ramses IX, who reigned in the 12th century BC, brought up the rear.

One of the most famous pharaohs, Ramses II, who ruled over Egypt for 67 years, and Queen Hatshepsut, the most powerful female royal, were part of the parade.