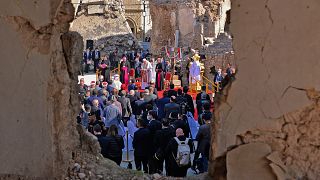 Pope Francis made an appeal for peaceful coexistence in Iraq on Sunday as he prayed for war victims.

He prayed amid church ruins in Mosul, a city that suffered widespread destruction in the war against the Islamic State.

In a scene unimaginable just four years ago, the pontiff mounted a stage in a city square surrounded by the remnants of four heavily damaged churches.

He addressed the plight of Iraq's Yazidi minority which was subjected to mass killings and sexual slavery at the hands of the Islamic State.