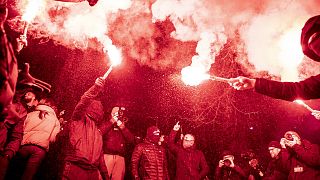 At least eight people were arrested at an anti-COVID demonstration in Copenhagen on Saturday as Danes protested the government's handling of the pandemic.

Several hundred people took part in protest in the Danish capital organised by the "Men in Black" activist group.

Carrying flares and torches, and chanting "Today Denmark has had enough! Freedom for Denmark we have had enough!," attendees were protesting measures put in place by the Danish government to curb the spread of COVID-19 that came into force last week.

Despite arrests for fireworks and public order offences, Copenhagen police say the protest was largely peaceful.

An estimated 600 people took part initially, with attendees swelling to over a thousand people by the time it reached the city's town hall.

While some parts of society - including shops and small-scale sporting activities - will begin to open up on Monday, the government extended measures that have been in place since December, including closures of bars, restaurants, secondary schools, and universities, until April 5.