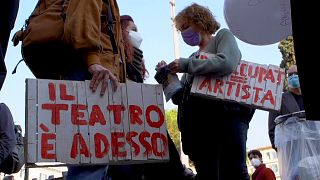 Hundreds of culture sector workers demonstrated in Rome on Tuesday to demand action from the government after the pandemic has seen their work halted for over a year.

Actors, musicians, performers and dancers took to the streets to show their frustration, with many saying they faced severe economic difficulties during the long period of closure due to the restrictions imposed by the government that are aimed at containing the pandemic.

They claimed they haven't received enough financial support from the Italian government, and asked for greater investment, as well as a swift reopening of theatres.

The protesters marched in a colourful parade towards the country's parliament.