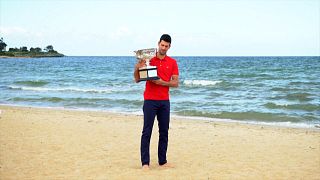 Novak Djokovic showed off his Australian Open trophy after winning his ninth title.

Djokovic's 18th major crown placed him within striking distance of the men's record of 20, jointly held by Nadal, who lost in the quarter-finals, and Federer, who was absent due to injury.

But the Serb also raised the prospect of a bigger goal: reaching the 23 held by Serena Williams, and even the 24 won by Margaret Court.

Djokovic said he wanted to get "closer to maybe Roger's, Rafa's record, Serena, Margaret," when asked about his goals and schedule for this year.

"Everyone has their own journey and their own way of making history. They've made history already. They made a tremendous mark in our sport," he said.

"I think about winning more Slams and breaking records, of course. And most of my attention and my energy from this day forward, until I retire from tennis, is going to be directed in majors, trying to win more major trophies."