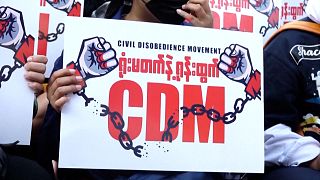 Hundreds of protesters gathered at the Hledan junction in Yangon on Sunday, holding signs backing civil disobedience towards the new military rulers which took the power in Myanmar's coup.

A large photo of military chief Min Aung Hlaing was drawn on the ground so protesters could walk or cycle over his image, a gesture of contempt in the local culture.

The Hledan intersection is a key crossroads from which groups fanned out to other points, including the embassies of the United States and China.

Protesters marched despite an order banning gatherings of five or more people.

Mass street demonstrations in Myanmar entered their second week, with neither protesters nor the military government they seek to unseat showing any signs of backing down from confrontations.

The military ousted the country’s leader, Aung San Suu Kyi, and her government and prevented recently elected lawmakers from opening a new session of Parliament.

The junta, led by Senior General Min Aung Hlaing, said it was forced to act because Suu Kyi’s government failed to properly investigate allegations of fraud in last year’s election, which her National League for Democracy party won in a landslide.

The election commission said there is no evidence to support the military's claims.