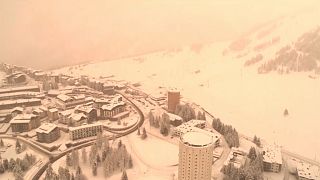 Red sand from the Sahara Desert fell on the snow-covered landscapes of the Italian Alps Saturday turning the winter wonderland a pale orange shade.

Visitors who signed up for a sled ride pulled by huskies in northwestern Italy last weekend were in for a surprise, a ride through a desert-hued landscape.

The alpine village of Sestriere, in the Piedmont region, was blanketed as were several regions in Europe over the past week.

The European Commission's Copernicus satellite monitoring program said measured levels of particles smaller than 10 micrometer – so-called PM10s – increased in places such as Barcelona, Spain and in the French cities of Lyon and Marseille on Sunday.