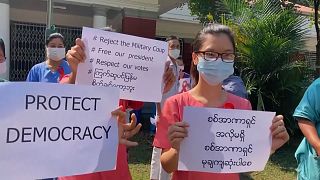 Protests against Monday's military coup are growing in Myanmar.

Protests against Monday's military coup are growing in Myanmar.

On Friday, students, health workers and teachers came out to demand that soldiers return to their barracks, release the country's detained leaders, including Aung San Suu Kyi, and restore democracy.

Around 100 students marched across a campus at Dagon University in Yangon, carrying the red flag of Suu Kyi's National League for Democracy.

The 2008 military-authored constitution ushered in a transition to democracy, but crucially let the armed forces retain significant political power that caused enduring and serious friction between them and Suu Kyi's National League for Democracy.

At the same time as the Dagon students were marching, teaching staff from the same university held their own protest, supporting the anti-coup cause.

The anti-coup movement appears to be growing bolder and picking up momentum with more protestors prepared to come out in the open during daylight, despite the possibility of arrest.

Students and universities have a long history of political activism and involvement in challenging the authorities, dating back to the days of British colonial rule.