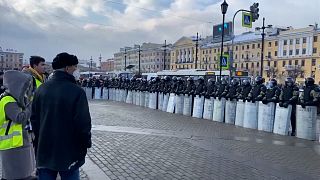 Demonstrations are taking place across Russia even as authorities crackdown on protesters.

Police in the Russian capital announced the closure of seven metro stations and limited pedestrian movement in an unprecedented move.

Hundreds of police in riot gear lined the streets of the capital from the early hours of Sunday morning, restricting movements in the city centre.

Opposition supporters had called for a second weekend of demonstrations after tens of thousands protested across the country last Saturday over the arrest of President Vladimir Putin's most prominent opponent.

Navalny was detained at Moscow's airport in mid-January after flying back from Germany where he was recovering from an August poisoning he blames on the Kremlin.