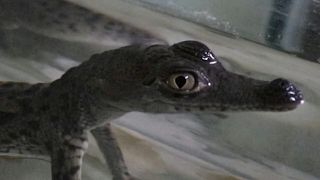 A zoo is celebrating after the birth of two baby crocodiles.

The pair, of the American or Tumbes species, were born at a zoo in Lima after a successful artificial incubation period.

The zoo has launched a social media campaign to name the two reptiles.

This species is found in the southern United States, Mexico and Venezuela, but in countries such as Peru and Ecuador, it is critically endangered.

Relentless hunting for their skins reduced their numbers drastically in the 1960s. Restrictions now control trade in caimans and their skins.