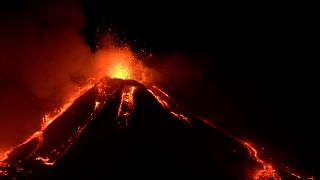 The lava flowed into an uninhabited valley while some ash blew over some of the nearby towns but there were no risks for the local population.

The other two active volcanoes in Italy include Stromboli, on the Sicilian island of the same name, and Mount Vesuvius near Naples which last erupted in 1944.