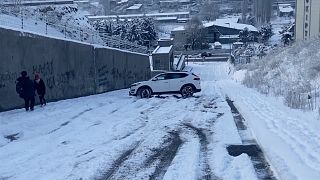 Snow blanketed most of the Turkish city of Istanbul on Monday bringing traffic to a halt in some areas.

Cars were seen stalled and skidding on the roads.

It comes as extreme cold has hit large parts of Europe, with freezing temperatures cracking railroad tracks in Poland and smog spiking as coal was being burned to generate heat.