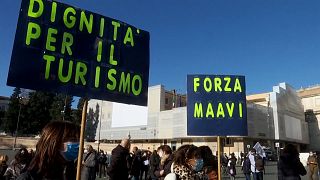 Workers from Italy's tourism industry have been making noise in Rome over the impact of the coronavirus pandemic.

Many said they had lost tens of thousands of euros amid travel restrictions and had been abandoned by authorities.

According to data provided by Italy's national statistics agency, ISTAT, foreign tourism in Italy dropped by 68.6% in 2020, predominantly in major cities that attract tourists for art – Rome, Florence, and Venice which have registered an even higher drop of 73.2%.

Italians have also stopped travelling for work by 59%, and travel for pleasure has dropped by 23%, according to ISTAT.

The tourism industry was excluded from the second government relief package according to the Autonomous Movement for Travel Agencies (MAAVI).

Some protesters suggested that the government should create "health corridors" to allow people to travel.