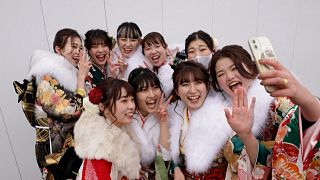 More than a million people in Japan turn 20 this year, the age at which they can legally drink alcohol, smoke and get married without parental approval.

They are traditionally feted each January on "coming-of-age day" with a formal ceremony, originally a rite of ancient samurai families -- now often followed by raucous drinking sprees.

But a record surge in Covid-19 cases and a month-long virus state of emergency declared in and around Tokyo has led many local authorities to scrap or postpone the 2021 festivities.

Kawasaki and neigbouring Yokohama are included in the state of emergency, which is less strict than the harsh lockdowns seen in other countries.

At Yokohama Arena, women in ornate kimonos, fluffy white stoles and masks sat in socially distanced seating for the ceremony, with the men dressed mainly in suits.

The arena's capacity was limited to 5,000, with four separate ceremonies held on Monday. Participants were told to keep their distance and speak quietly to avoid spreading the respiratory disease.

The fishing city of Yaizu in central Japan held a "drive-in" Coming-of-Age event on Sunday, drawing some 470 vehicles to the harbourside celebration.