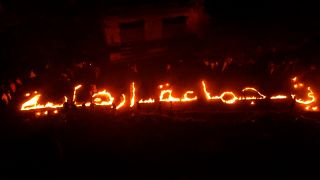 Yemeni citizens of the Al-Jahmiliya neighbourhood, the most destroyed neighbourhood in Taez, lighted hundreds of candles on Christmas Day to draw the world's attention to end the war in their city.

Yemen, which since 2014 has been gripped by a war between Iran-backed Huthi rebels and a beleaguered government supported by a Saudi-led military coalition, faces the world's worst humanitarian crisis.