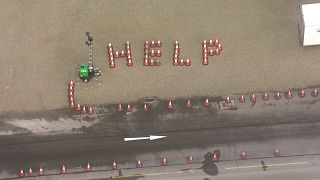 The drivers are being held up by the slow delivery of coronavirus tests, which are now required by France for them to enter the country following a scare over a rapidly spreading new virus variant.

Trucks were slowly inching past checkpoints at the English port of Dover and heading across the Channel to the French port of Calais after France partially reopened its borders with Britain.

One by one, trucks passed toward ferries and trains that link Britain with France, as authorities checked that drivers had the negative virus tests now required to make the crossing.

On the French side, powerful winds buffeted the coast before dawn and the vast Calais port - which normally takes in up to 4,000 trucks a day - remained quieter than usual.

Officials warned the backlog could take days to clear.

One UK road haulage expert estimated there could be 8,000 to 10,000 trucks caught up in the chaos near Dover.