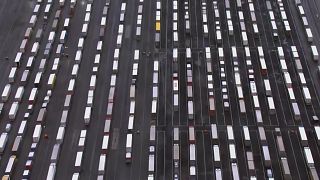 Trucks waiting to get out of Britain were parked at a lorry park on Tuesday as France barred travel from the UK for 48 hours because of a new and seemingly more contagious strain of the coronavirus in England.

The vehicles were lined up at a former airfield close to the M20 highway that runs from London to the port of Dover.

The French ban raised fears of shortages of certain perishable food items in Britain if the restrictions drag on.

After a conversation Monday with French President Emmanuel Macron, British Prime Minister Boris Johnson said he understood the reason for the new measures and expressed hope for a swift resumption in the free flow of traffic between the two countries.

He said officials from both countries were working to unblock the flow of trade as fast as possible.

Macron said France was looking at a system for all lorry drivers to be given COVID tests before arriving in the country.