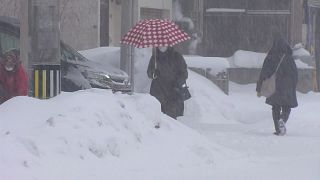 The record snowfall this week in Niigata and neighbouring Gunma was brought by a strong cold air mass.

More than 2,000 vehicles were stranded for many hours on an expressway.

Snowfall is expected to intensify in some areas on Sunday.

This is expected to then increase through Monday morning.