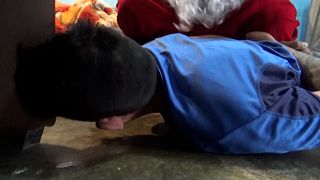 Police in Peru carried out a drugs-related arrest in a Santa Claus and elf disguise.

The operation in Lima led to the arrest of suspects accused of working in the local drug trade.

Police arrested the alleged kingpin of a gang called 'Los Flaquis', The Skinnies, who was found with drugs and firearms at his home.

The leader of this gang is accused of selling drugs from his home; four individuals were arrested during the raid.

The use of disguises during police raids is not uncommon in Peru, with authorities defending the practice as a strategy that creates surprise.

Authorities released footage of the raid on December 16.