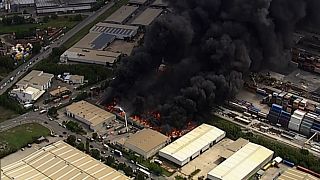 Firefighters attempted on Wednesday to contain a large fire at an industrial site in Brisbane.

The blaze was near the Australian city's port.

Huge plumes of smoke from a recycling plant billowed across the city.

More than a dozen firefighters and paramedics were at the scene and police cordoned off the area.

Residents were encouraged to close their windows and remain indoors after authorities issued a smoke warning.