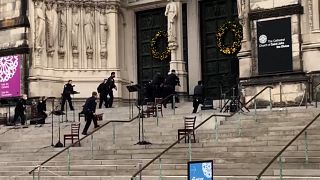 This is the moment an eyewitness captured gunshots being fired outside a landmark New York City cathedral on Sunday.

A man fired a gun at the end of a Christmas concert at the site.

Police moved in to shoot the gunman on the steps of the cathedral. He was taken to a hospital in critical condition.

It wasn’t clear if the gunman had been aiming at people or firing in the air.

The shooting happened just before 4 pm local time at the Cathedral Church of Saint John the Divine, mother church of the Episcopal Diocese of New York.