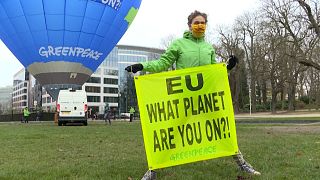 'What planet are you on?': EU urged to do more over climate crisis

Environmentalist group Greenpeace deployed a hot air balloon in Brussels as European leaders gathered to discuss whether to approve a proposal to reduce the EU's greenhouse gas emissions by at least 55% by 2030.

But that reduction is not enough for some.

"EU leaders are discussing a 55% climate target and this target is nowhere near enough to combat the worst impacts of climate change," said Sebastian Mang, Greenpeace's climate policy advisor.

"Millions of people are already suffering from climate change in the global south, but also here in Europe, and it is irresponsible and dangerous to set targets that are not in line with science," he added.

Greenpeace argues the science, technology and money to tackle climate change already exists. What is missing, they say, is the political will to do so.