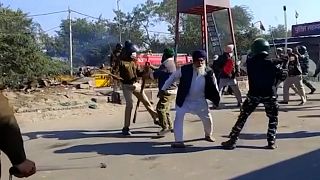 Thousands of angry Indian farmers faced tear gas and baton charges from police on Friday as they resumed their march to the capital to protest new laws they fear will give more power to corporations and reduce their earnings.

Heading towards New Delhi, the farmers used tractors to clear walls of concrete, shipping containers and parked trucks set up by police on highways leading to the capital.

The farmers began their march to New Delhi on Thursday to mount pressure on Prime Minister Narendra Modi's government to abolish the laws but were stopped by large numbers of security personnel in riot gear on the boundary between New Delhi and Haryana state.

They resumed their march early on Friday, unfazed by overnight rain and chilly winter temperatures.

For the last two months, farmer unions unwilling to accept new legislation have camped on highways in Punjab and Haryana states.

They say the laws, which were approved by parliament in September, could cause the government to stop buying grain at guaranteed prices and result in exploitation by corporations that would buy crops at cheap prices.