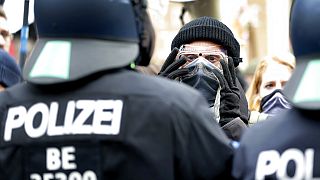 Police in Berlin used water cannons on protesters demonstrating against government measures to curb the spread of coronavirus.

They did it because protesters had refused to listen to their orders to wear face masks and keep their distance from one another in line with regulations.

Thousands turned out in the German capital for the demonstration. It happened as MPs debated a bill that would strengthen official powers to impose further measures. It would provide the legal underpinning for social distancing rules, requirements to wear masks in public and closing stores and other venues to slow the spread of the virus.

Germany, which has been praised for its handling of the first wave of the virus, has seen 13,000 virus-confirmed deaths in the pandemic, a death toll one-fourth that of Britain's.