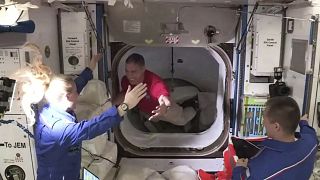 NASA turned to private companies to haul cargo and crew to the space station after the shuttle fleet retired in 2011. SpaceX qualified for both. With Kennedy back in astronaut-launching action, NASA can stop buying seats on Russian Soyuz rockets. The last one cost $90 million.

This is the second astronaut mission for SpaceX. But it’s the first time Musk’s company delivered a crew for a full half-year station stay. The two-pilot test flight earlier this year lasted two months.

The three Americans and one Japanese astronaut will remain at the orbiting lab until their replacements arrive on another Dragon in April. And so it will go, with SpaceX — and eventually Boeing — transporting astronauts to and from the station for NASA.