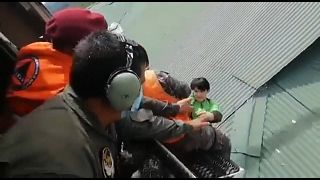 Guatemala's first army brigade reached the site of a massive landslide Friday morning in the central mountains where an estimated 150 homes were buried a day earlier.

They have not yet recovered any dead, but said that more than 100 people are believed to be missing.

Troops helped evacuate some families stranded in San Cristobal Verapaz and airdrop supplies to others on Friday.

At a news conference, President Alejandro Giammattei said he believed there were at least 100 dead in San Cristobal Verapaz, but noted that the number was still unconfirmed. It will be days before the true toll of Eta is known.

Torrential rains battered economies already strangled by the COVID-19 pandemic, and laid bare the shortcomings of a government unable to aid its citizens and pleading for international assistance.