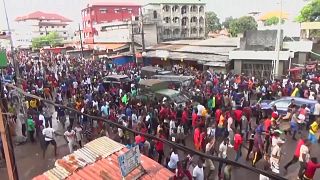 Guinea's opposition leader Cellou Dalein Diallo claimed victory in presidential elections on Monday as thousands of his supporters took to the streets of the capital Conakry.

They massed outside Diallo's party headquarters to celebrate after he declared himself the winner of Sunday's ballot.

Diallo did not give any figures to back up his claim but said it was based on information gathered by his party, the Union of Democratic Forces of Guinea.

The national election commission has not announced official results.

President Alpha Conde, who is seeking a controversial third term, has condemned Diallo's declaration as "irresponsible and dangerous".

Diallo's claim of victory is expected to raise tensions in the West African nation.