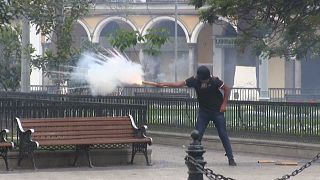 The substitute was appointed by the Cochabamba Municipal Council after Leyes closed the door to the mayor’s office for 30 days.

"We are also conducting investigations to determine who would belong to these groups or who would be behind these groups," said Javier Mendoza, Commander of the National Police of Cochabamba.

It comes ahead of presidential elections on October 18.