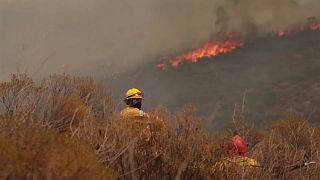 About 300 firefighters try to control fires in Cordoba, Argentina

Some 300 firefighters tried to put out on Thursday two large forest fires that are still active in a mountainous area of Córdoba province, in central Argentina.

Dozens of people have been evacuated from the area.

One of the fires was heading towards a valuable old church, Estancia La Candelaria, the largest of the Jesuit temples in the area and declared a World Heritage Site by UNESCO.

Argentinian authorities are investigating whether the fires were intentional.

The province of Córdoba has reported nearly 50,000 hectares in fires since the beginning of the year. Another nine provinces have also been affected in Argentina.