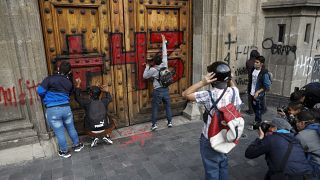 Mexico has issued 25 arrest warrants for those who carried out and knew about the abduction of 43 students in southern Mexico in 2014, including for the first time members of the military and federal police, the Attorney General’s Office announced Saturday.

“Those responsible for the forced disappearance of the 43 students in the south of the country are fully identified” and will be prosecuted, unlike the manipulation and cover-up that happened under the previous administration, said Attorney General Alejandro Gertz Manero on the sixth anniversary of their disappearance.

The students' families have long demanded that soldiers be included in the investigation.

"Those proven to have participated will be judged," said President Andres Manuel Lopez Obrador on Saturday at an event with parents of the missing students.

Local police, other security forces and members of a gang abducted the students in Iguala, Guerrero on the night of September 26, 2014.

It occurred near a large army base and independent investigations showed members of the military were aware of what was occurring.