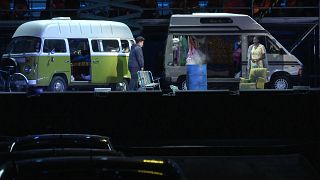 The English National Opera  is more accustomed to performing in packed 2,000-seater theatres, rather than car parks.

But as COVID-19 restrictions put a halt to traditional indoor performances, the almost 90-year-old opera company is embracing an open-air alternative - the drive-in.

Even the performance was tailored to follow virus guidelines, including a shortened, 90-minute version to avoid an intermission.

Cast members maintain social distancing throughout, except for one exception - two cast members are romantically involved, so are allowed to touch each other and kiss onstage.

Organisers hope such drive-in style performances will not become the norm, but they do offer hope to an industry hit hard by the virus outbreak.

For both performers and audience members, it's the first experience of live opera in months.

ENO plans to reopen its London Coliseum venue to socially distanced audiences on November 7 for special performances of Mozart's Requiem.