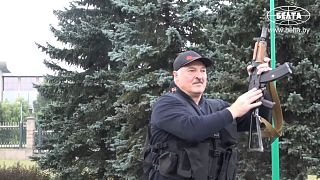 Belarus' authoritarian president has made a dramatic show of defiance against massive protests demanding his resignation, toting a rifle and wearing a bulletproof vest as he strode away from a helicopter that landed at his residence while demonstrators massed at the perimeter of the property.

On Sunday, the 15th day of the largest and most determined protests ever in independent Belarus, a crowd of about 200,000 rallied against President Alexander Lukashenko in a square in central Minsk, then marched to another rally and approached the Independence Palace that is the president's working residence.

Video from the state TV and Radio company showed a government helicopter landing on the grounds and Lukashenko getting off holding what appeared to be a Kalashnikov-type automatic rifle.

No ammunition clip was visible in the weapon, suggesting that Lukashenko, who cultivates an aura of machismo, aimed only to make a show of aggression.

Protests started August 9 at the conclusion of a presidential election that officials say handed the 65-year-old Lukashenko his sixth term in office with 80% approval; opponents claim the results were fraudulent.

The size and duration of the protests have been unprecedented for Belarus, a former Soviet republic of 9.5 million people that Lukashenko has ruled for 26 years.