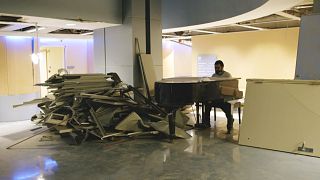 Engineering student Chadi Haddad played piano at a hospital where volunteers were cleaning up rubble after the explosion in Beirut, Lebanon.

The explosion, which took place on Tuesday, killed more than 150 people and injured thousands.

Saddened by the loss of so many lives, Chadi Haddad went to the nearby Saint George hospital.

"The piano belongs to St Georges Hospital which was damaged by this catastrophic explosion, and it existed there since 2010," Haddad said.

"I believe that music is one of the divine ways to transform our emotions into a language that everyone can speak," he added.

"Since sadness dominated each corner of Beirut, especially the hospital, where most of the patients were injured and some nurses died, I decided to cheer up all the workers, the volunteers, and the staff by playing some music, which was translated into a source of power for everyone."