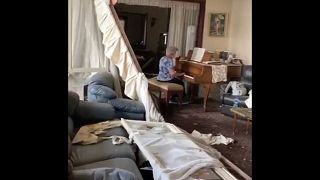 Amid the debris and damage of an apartment caught in Beirut's blast, an elderly woman plays Auld Lang Syne on the piano.

The video was shot by Hoda Melki, who captured her mother making the music a day after the explosion in Lebanon's capital.

The video shows the extensive damaged caused to the woman's apartment, with broken glass and debris scattered around the room.

The blast appeared to have been caused by an accidental fire that ignited a warehouse full of ammonium nitrate in Beirut's port area.

It killed at least 137 people, injured more than 5,000 and caused widespread destruction.