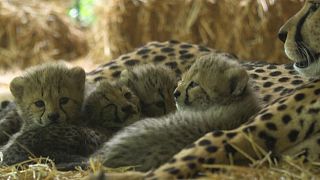 Four cheetahs were born on June 22 at the Schönbrunn zoo in Vienna.

Their mother, Afra, comes from a breading station in South Africa and has been living in Austria since 2013.

Ghalib, a male cheetah, is the cubs' father. He arrived from the Erfurt zoo in March 2020 with keepers hoping the pair would make a good match.

Cheetahs are considered an endangered species on the Red List, as they face a loss of habitat in the African savannah.

Zoos are breeding cheetahs as part of a European conservation breeding programme.