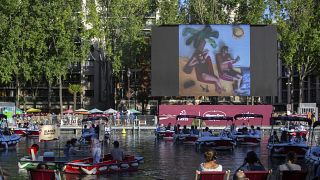 Paris Plages opens with floating cinema on the Seine

With an unusual alternative to indoor movie theatres in the time of COVID-19, Paris Plages has this year opened with an open-air cinema set on the banks of the River Seine.

Paris Plages is an annual event that transforms sections of the River Seine waterfront into beachfront.

This year organisers MK2 Cinemas partnered with the city of Paris for the event.

On July 18 moviegoers were able to watch a free showing of 2018 French comedy "Le Grand Bain" from 38 electric boats or on deck chairs on the river bank.

MK2 Cinemas Chief Executive Officer Elisha Karmitz said it was an opportunity to show people that people could continue to enjoy cinemas in Paris — in all forms.

"After the few months of confinement, we thought we needed a way to tell to the people and to tell to the world that cinemas are open in Paris, that Paris is one of the worldwide capital of cinema."

Parisian Luc Buvier said he went to an indoor cinema wearing a mask but was still apprehensive.

He said he felt much safer at an open-air screening.