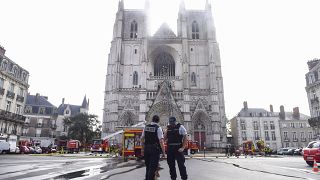 A fire broke out in the Gothic cathedral of the western French city of Nantes, shattering stained glass windows and sending black smoke billowing from between its towers as firefighters fought the blaze.

Residents and tourists watched aghast, and emergency workers cordoned off the area around St Peter and St Paul Cathedral, in the historical centre of this city on the Loire River.

The local firefighter service warned people to avoid the area while efforts to extinguish the blaze were ongoing. The cause is unclear.

The fire broke the main stained glass windows between the two towers of the 15th-century cathedral, which also suffered a serious fire in 1972.

It is "a dramatic event for the lives of the people of Nantes", says the prosecutor of Nantes, Pierre Sennès, in front of the cathedral, after the fire was quickly contained. He noted that "there is no damage to the structure" of the Gothic building, "as was the case for Notre-Dame-de-Paris", but that the great organ "has almost disappeared". An arson investigation has been opened.

The blaze brought back memories of the devastating fire in Notre Dame Cathedral in Paris last year that destroyed its roof, collapsed its spire and threatened to topple the medieval monument.