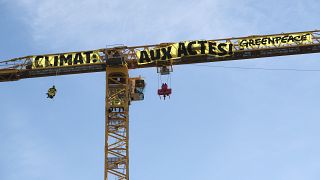 Greenpeace activists scaled a crane at Notre Dame cathedral in Paris on Wednesday in a protest against the French government's climate policies.

Four protestors hung a banner from a huge construction crane being used in the renovation of the fire-ravaged cathedral urging French president, Emmanuel Macron to "Take Action!"

"Here are three banners. 80 meters from the ground, above Notre Dame de Paris," said one of those involved in footage captured by the activists from on top of the crane.

Newly-nominated Minister of Culture Roselyne Bachelot expressed her disapproval of the event, pointing out that the site remained "extremely fragile" and it could have "harmful consequences" to the damaged cathedral's structure.

The world-famous medieval landmark is under reconstruction after being gutted by a devastating fire in 2019.