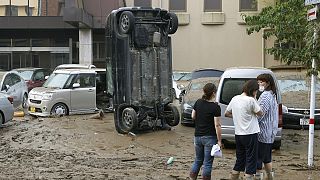 The death toll from floods and landslides caused by heavy rain in Kumamoto Prefecture, southwestern Japan, has reached 18, while 14 are missing as of 16:00 on Sunday.

About 50 people were stranded at a nursing home in a flooded area of the village of Kuma.

Fourteen of them were found without vital signs. Authorities say Self-Defense Force members worked overnight to transfer some elderly residents from the facility to a hospital.

The village of Sagara, have been cut off by floods and landslides.

Rainfall that exceeded 100mm per hour has subsided, but the Japan Meteorological Agency kept mudslide warnings in place across Kumamoto.