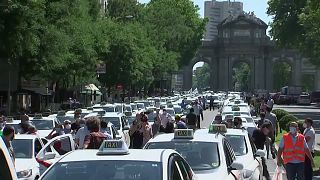 Thousands of taxi drivers brought central Madrid to a standstill on Tuesday in a protest directed at city authorities over their decision to allow taxis to return on masse to the capital's streets.

Taxis parked-up in an almost continuous queue around Madrid's most central landmarks, honking their horns and clogging up the city's streets.

Taxi associations, like the Federation of Professional Taxi Drivers which called the protest, were hoping for at least 10,000 drivers to turn out.

Driver Francisco Jose Barandillo, who has been driving taxis for over 10 years and has offered free transport to health workers during the coronavirus pandemic, said he was disappointed with the local government's actions.

During the lockdown, the city's fleet of taxis worked alternative days. Since the easing of restrictions, all taxis have been allowed to begin operating again, creating a surplus due to the lack of demand.

Barandillo also criticised the city council for deciding to drop the requirement for drivers to pass the basic mandatory education system exam to be able to apply for a local taxi license.

Madrid taxi drivers are also engaged in a battle against app-based private hire platforms, such as Uber and Cabify.