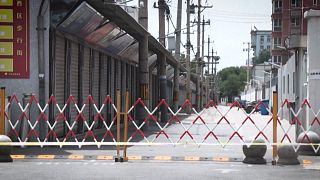 Beijing is bracing for a second wave of coronavirus after authorities confirmed 49 new cases of the coronavirus in the Chinese capital.

The city's You'an Hospital began the mass testing of 76,000 people on Monday, after the discovery of the new cases.

Dozens of people lined up outside the hospital to scan their government-issued health codes on their mobile phone before they were allowed to enter for nucleic acid tests (NATs).

In Beijing's central business district, dozens more people lined up at the Meinianda One Health Physical Examination Center for testing while some health workers tested people in their cars.

Of the new cases, 36 have been linked to the Xinfadi market, the city's largest wholesale market which supplies much of its meat and vegetables.

10 of the other cases are believed to have been brought into China from outside the country and the remaining three were found in Hebei province, outside Beijing.

China's National Health Commission reported that 177 people are being treated for COVID-19, while 115 are in isolation and under surveillance after showing signs of the disease or for having tested positive without displaying symptoms.

Beijing has closed the Xinfadi market, ordered tests to be carried out on all its workers, and has imposed self-isolation on anyone who has been there recently. Neighbourhoods near the market have also been put into lockdown.