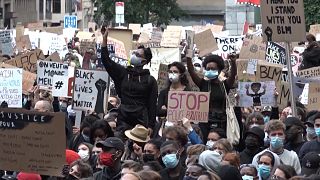 Several thousand people filled a large square in front of Brussels' main courthouse on Sunday to protest against racism following the death of George Floyd in the US last Monday.

There were an estimated 10,000 people who demonstrated in Brussels, Belgian media reported, while smaller crowds gathered in the cities of Anvers and Gand, where demonstrators observed a silence of eight minutes and 46 seconds.

It's the length of time that prosecutors say Floyd was pinned by the neck under a white Minneapolis police officer’s knee before he died.

Clashes between police and protesters in Brussels broke out later in the day but the early demonstrations were peaceful.

Some protesters in Brussels climbed and defaced the statue of colonial King Leopold II whose rule oversaw the deaths of millions of people.

Many protesters wore masks, though experts have recently raised concerns about the lack of social distancing, stating that protests could fuel a second wave of coronavirus infections.