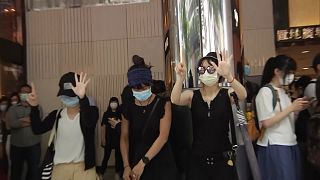 Demonstrators gathered at Hysan Place shopping mall on Wednesday to protest against a law that would criminalise abuse of the Chinese national anthem in the semi-autonomous city of Hong Kong.

It was one of several locations occupied by pro-democracy protesters as lawmakers were set to debate the law at the Legislative Council building (LegCo) on Wednesday.

Police had blocked road access to the LegCo on Tuesday ahead of the debate, as officers in riot gear flooded the streets of the semi-autonomous city.

Protest calls went out Tuesday night, urging people to surround the legislature buildings and block roads in an attempt to derail the proceedings, but they didn't materialize.

The police reported small incidents of obstruction of traffic and the city's subways at certain stations.

The bill makes it illegal to insult or abuse the "March of the Volunteers." Those found guilty could face up to three years in prison and a maximum fine of HK$50,000 (US$6,450).

The anthem bill was first proposed in January 2019, after Hong Kong spectators jeered at the anthem during international soccer matches in 2015.

Anti-China sentiment has been on the rise in Hong Kong since 2014 protests, known as the Umbrella Revolution, that stemmed from the Chinese government's decision to allow direct election of the city leader only after it screened candidates. In the end, the plan for direct elections was dropped.

The move by Beijing was seen as curtailing democracy in Hong Kong, a former British colony that was handed back to China is 1997 under a "one country, two systems" framework that promises the city freedoms not found on the mainland.

The debate over the bill also comes as Beijing moves to enact a national security law for Hong Kong, aimed at forbidding secessionist and subversive activity, as well as foreign interference and terrorism, after a months-long pro-democracy protest movement last year that has at times resulted in violent clashes between police and protesters.

Critics say that the national anthem bill is a blow to freedom of expression in the city, while Beijing officials previously said that the law would foster a patriotic spirit and the country's socialist core values.