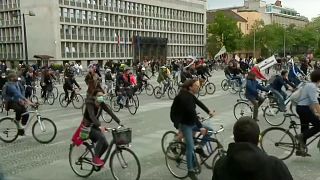 Some 3,000 protesters on bicycles staged a protest against Slovenia's centre-right government on Friday (May 1), despite gatherings being banned amid a lockdown against the new coronavirus.

The protest in Ljubljana was held for a second week in a row over claims of political interference in the procurement of protective gear and ventilators during the virus outbreak.

Wearing face masks and shouting "Thieves!," the protesters passed through the centre of the city before stopping or riding in circles by the government and parliament buildings.

Slovenian anti-corruption authorities have launched an investigation into the allegations. Government officials have denied any wrongdoing.

A country of two million people, Slovenia has reported 1,434 cases of infection with the new coronavirus while 93 people have died.

Only five new infections were registered on Friday.

For some, especially older adults and people with existing health problems, it can cause more severe illness.