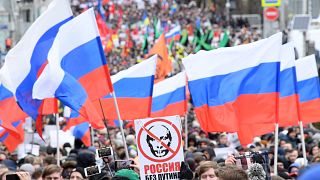 Opposition urges 'Russia without Putin' in rally for Boris Nemtsov

Thousands of people hit the streets of Moscow on Saturday to call on President Vladimir Putin not to stay in power indefinitely.

It was the first major demonstration by the Russian opposition since Putin announced controversial plans to change the constitution.

The rally marked five years since the murder of opposition politician Boris Nemtsov, but its organisers also wanted the event to send a message to Putin.

Organisers, including the country's most prominent opposition leader Alexei Navalny, called for a mass turnout to show Putin that he must not consider staying in power by any means when his current mandate ends in 2024.

"The Putin regime is a threat to humankind," said the slogan on one placard next to a portrait of Nemtsov.

"Putin's policies are based on total lies," said another, quoting the liberal politician who was on assassinated on February 27, 2015, in central Moscow.

"Russia without Putin!" the crowds chanted repeatedly as they began marching.

Putin, who has dominated Russia for two decades, in January unleashed a political storm, proposing an overhaul of the constitution, the first changes to the basic law since 1993.

Analysts see the plan as beginning preparations for succession when Putin's fourth presidential term ends in 2024, while the opposition says the Kremlin strongman wants to remain leader for life.

Putin first came to power as prime minister in 1999 under Boris Yeltsin before becoming president in 2000. He served the maximum two consecutive terms between 2000 and 2008 before a four-year stint as prime minister.

He returned to the Kremlin in 2012 for a newly-expanded six-year mandate and was re-elected in 2018. But opponents fear he could remain Russia's number one even if the job of president nominally goes to someone else in 2024.

Kseniya Telmanova, 21, a student, reflected that Putin had been president for her whole life except her first few months. "Probably those were the best months of my life," she said, laughing. "The leaders should fear the fact they can lose power."

Russia is planning to hold a referendum on the constitutional amendments on April 22.