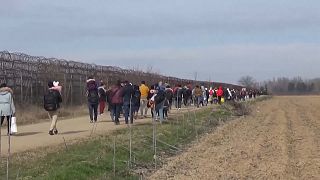 Scores of migrants walked towards Turkey's border with Greece on Friday, seeking entry into Europe.

This came a day after Syrian government airstrikes killed 33 Turkish troops, significantly ratcheting up tensions between Ankara and Moscow.

The development was the most serious escalation in the conflict between Turkish and Russia-backed Syrian forces and raised the prospect of all-out war with millions of Syrian civilians trapped in the middle.

A spokesman for President Recep Tayyip Erdogan's ruling party said Turkey was "no longer able to hold refugees" following the Syrian attack — reiterating a longstanding warning from Erdogan that his country could not cope with the arrival of more people fleeing the conflict.

Turkey hosts some 3.6 million Syrians and under a 2016 deal with the European Union agreed to step up efforts to halt the flow of refugees to Europe. Since then Erdogan has repeatedly threatened to "open the gates" in several disputes with European states.

A Greek police official said dozens of people had gathered on the Turkish side of the land border in Greece's northeastern Evros region shouting "open the borders." Greek police and military border patrols were deployed on the Greek side to prevent anyone trying to cross without authorisation.

A government official said Greece has beefed up border security "to the greatest possible degree... on land and at sea", and that Athens is in constant contact with the EU and NATO following the developments in Idlib.