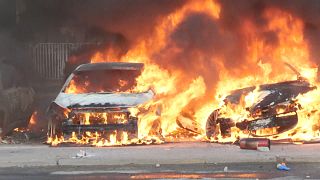 Thousands of protesters armed with stones, sticks and Molotov cocktails faced off against police this Sunday at the inauguration of the Viña del Mar festival.

Police blocked the entrance to a park where the festival was held in Viña del Mar, a spa about 120 kilometres west of Santiago.

Officers used a helicopter and a balloon with surveillance cameras and drove the protesters back with water cannon and tear gas.

After failing to break into the festival grounds, protesters attacked nearby shops as well as the enowned Hotel O'Higgins, where many festival artists stay.